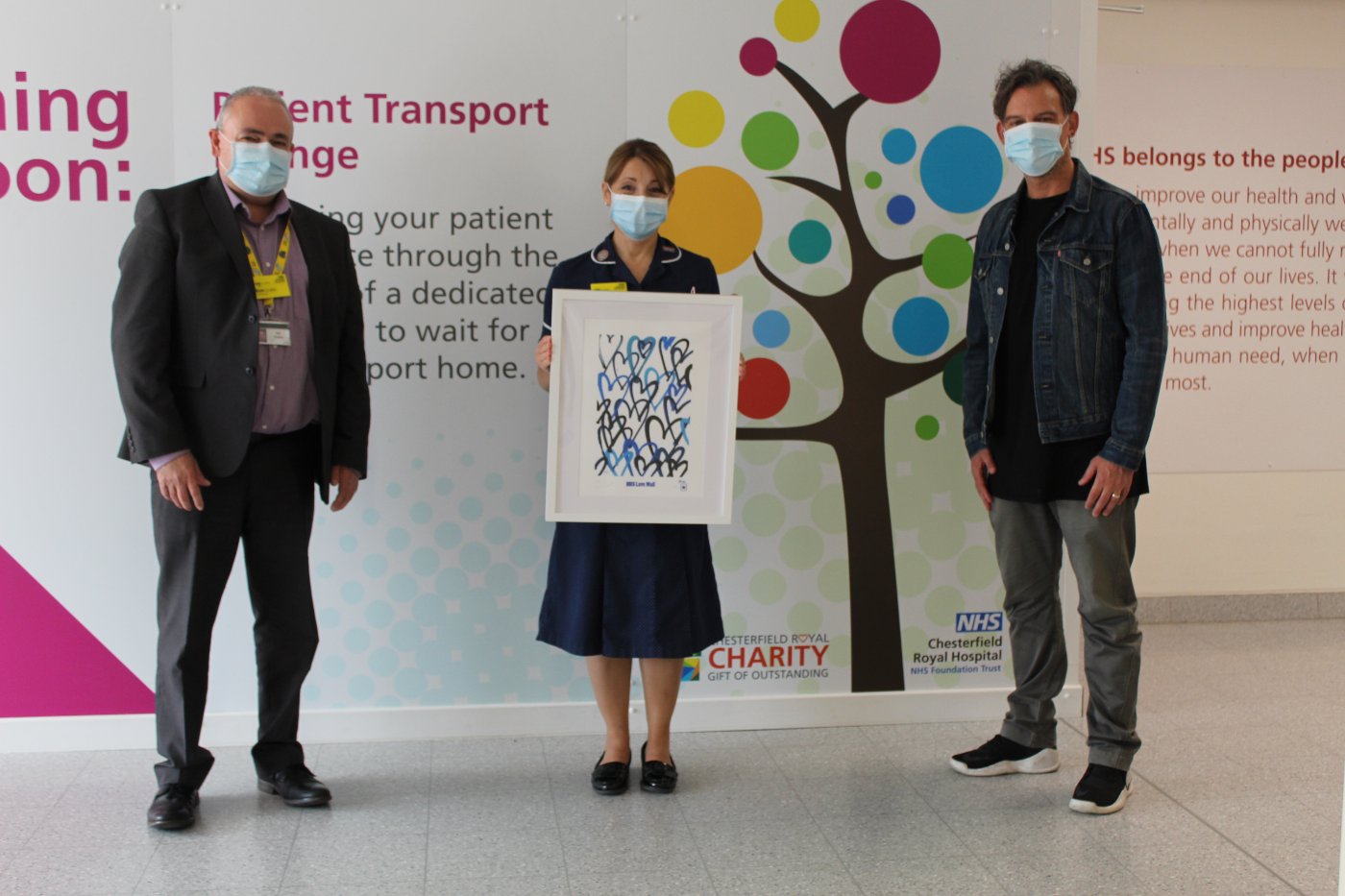 A local graffiti artist has created his own ‘NHS Love Wall’ and raised £250 for the Royal’s #ProtectYourNHS charity campaign.

‘Crombie’ (pictured above, right) also donated one of the prints to the Royal with a special message saying “To All at Chesterfield Royal Hospital, thank you for all you do. It will never be forgotten. Crombie.”

The total raised ran into the thousands and Crombie split the money between a number of regional hospitals and NHS campaigns, as well as creating something visual that was designed to highlight the fantastic work done across the NHS.

Crombie said: “At the start of the COVID-19 lockdown a number of friends and family asked if I could produce a piece of work that could act as a fundraiser and acknowledge the work the NHS has done throughout the pandemic. It wasn’t easy to formulate an idea but I knew it had to be simple, carry a message but without words.

“I had produced a few ‘Love Walls’ in the past and the design stood out with the hearts reflecting the caring values of the NHS so I developed it into a new design. It proved to be very popular and the number of prints ordered began to increase and were going all over the world – I’ve even sent several to the USA.

“What surprised me was that people weren’t buying the prints for themselves, they were ordering them as gifts for family and friends working during the pandemic. They wanted messages included on the back of the prints which for me, emotionally, was overwhelming but it was lovely for me to be able to produce something personal that meant something very special to someone else.”

Ken Godber is the Trust’s Charity Director, he said: “Our #ProtectYourNHS campaign has really caught the imagination of lots of people. It’s a strange time so traditional forms of fundraising have taken a backseat meaning we’ve seen some very creative and imaginative ideas that have resonated with the public and raised a lot of money.

“What Crombie has done is a great example of that. As an artist he’s able to use his skill to come up with an iconic image that has caught the mood and feeling of the moment. Those who have bought them have then been able to personalise them as a gift which only helps his message go further which is a wonderful thing and I’d like to thank him for everything he’s done.

“The campaign has raised money to enhance the health and wellbeing of our colleagues. It will also create further resources for our patients who are still unable to receive visitors as the Trust does all it can to protect patients, visitors and staff at the hospital from the risk of transmission. This will include basic essentials that would normally be provided by relatives and visitors to support through the current situation.”