A young boy from Bolsover has raised more than a thousand pounds by swimming a mile for the Royal’s NGS Macmillan Unit.

8 year old Hayden Hudson, who lives in Bolsover, completed the mammoth swim on Friday 5th October without a single break. It took him just over an hour, handing over a cheque for £1,020 to the unit’s matron and clinical team.

Hayden’s Mum, Tracey, said: “We have a close family friend who was having chemotherapy at the new unit and had her operation here earlier this month. We wanted to give something back to the team that’s been treating her and talked about a sponsored walk. Hayden overheard and wanted to join in but he couldn’t do the walk because it was on a school day. It was then that he came up with the idea of a sponsored swim. 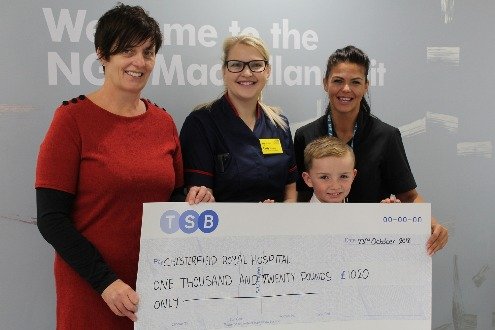 “He really enjoys swimming and had been practicing hard to make sure he could manage what we worked out would be 64 lengths of the pool at Queens Park Leisure Centre. He was aching a bit on the day because we’d done 100 lengths the Sunday before and another seventy or so on the Wednesday but he managed it which is a real achievement.

“Hayden’s sister, Rebecca, sorted out the sponsorship side and drummed up support for him, we got a lot of friends to sponsor him and set up a Just Giving page. Queens Park Leisure Centre were fantastic and set up a lane for him to use, moving him into a middle lane for the final two lengths to make it more of an occasion when he finished. We were able to cheer him on from the sidelines and we’re all so proud of what he’s done, it’s really remarkable and such a lovely gesture to the hospital and to our friend who is really touched by what he’s done.”

The money has been handed over to the Chesterfield Royal Hospital Charitable Funds that has a specific pot for cancer services and the team who work within the unit. The money will go towards services that wouldn’t ordinarily be paid for through hospital funds to make the experience of our patients more comfortable.

Carly Starkey is the matron within the unit, she said: “It was lovely to meet Hayden and hear about what he’s done which is an incredible achievement, I’m not sure any of us would be able to swim for that length of time without a break. It’s such a wonderful thing to do and a phenomenal amount for such a young boy to raise, it means a lot to us and will make a real difference to the patients and visitors who come here to receive treatment.”

A big thank you to Hayden on behalf of everyone at the Chesterfield Royal Hospital and all of the patients receiving treatment at our NGS Macmillan Unit. 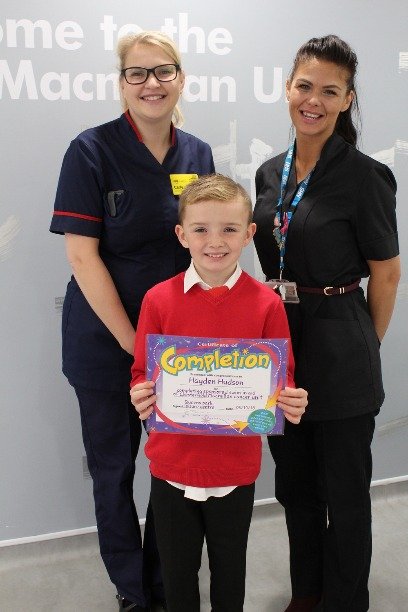